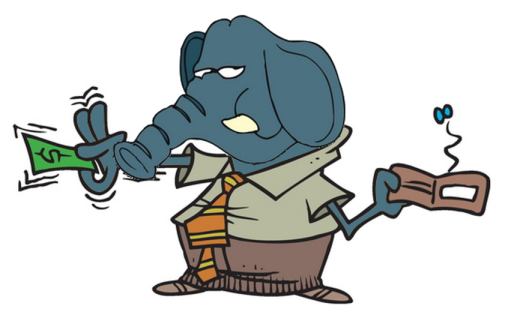 Who does not fail? Either one who is out-worldly talented or one who is insanely lucky. Surprisingly, most people who the world swears by today have had their share of failures. Each one of their autobiographies will tell you how miserable their life was at a point in time yet its was only a matter of choice – To Outgrow or To Succumb.

We regular folks are on the other hand unhappy for the lesser heart burns and make it a purpose of life to mourn while they, in the very same daylights, decided to fly.

Here below is a compilation of how these elephants failed and fell, we all know how they got up and ran so I will leave it for another day. This information comes from multiple sources like websites (Wikipedia, knowledgebase-script, e zine articles, about.com etc.) autobiographies of various thought and business leaders and a couple of HBR and other management journals.

Founder and chairman of Microsoft, has literally changed the work culture of the world in the 21st century, by simplifying the way computer is being used. He was the world’s richest man for more than one decade. However, in the 1970’s before starting out, he was a Harvard University dropout. The most ironic part is that, he started a software company (that was soon to become Microsoft) by purchasing the software technology from “someone” for only $US50 back then.

He received no more than 5 years of formal education throughout his lifetime. When he grew up, he joined politics and had 12 major failures before he was elected the 16th President of the United States of America.

Newton was the greatest English mathematician of his generation. His work on optics and gravitation made him one of the greatest scientists the world has even known. Many thought that Isaac was born a genius, but he wasn’t! When he was young, he did very poorly in grade school, so poor that his teachers became clueless in improving his grades. He even failed in mathematics, was thrown out of his fellowship and was home tutored to conclude.

A German composer of classical music, is widely regarded as one of history’s supreme composers. His reputation has inspired ? and in many cases intimidated ? composers, musicians and audiences who were to come after him. Before the start of his career, Beethoven’s music teacher once said of him “as a composer, he is hopeless”. And during his career, he lost his hearing yet he managed to
produce great music ? a deaf man composing music, ironic isn’t!

He was the one who developed many devices that greatly influenced life in the 20th century. Edison is considered one of the most prolific inventors in history, holding 1,093 U.S patents to his name. When he was a boy his teacher told him he was too stupid to learn anything. When he set out on his own, he tried more than 9,000 experiments before he created the first successful light bulb.

It was a retail company that was one of the original five-and-ten- cent stores. The first Woolworth’s store was founded in 1878 by Frank Winfield Woolworth and soon grew to become one of the largest retail chains in the world in the 20th century. Before starting his own business, Woolworth got a job in a dry goods store when he was 21. But his employer would not let him serve any customer because he
concluded that Frank “didn’t have enough common sense to serve the customers”.

By acclamation, Michael Jordon is the greatest basketball player of all time. A phenomenal athlete with a unique combination of grace, speed, power, artistry, improvisational ability and an unquenchable competitive desire. Jordan single-handedly redefined the NBA superstar. Before joining NBA, Jordan was just an ordinary person, so ordinary that was he was removed from the high school basketball team because of his “lack of skills’

This man was an American film producer, director, screenwriter, voice actor and animator. One of the most well-known motion picture producers in the world, Disney founded a production company. The corporation, now known as The Walt Disney Company, makes average revenue of US $30 billion annually. Disney started his own business from his home garage and his very first cartoon production went bankrupt. During his first press conference, a newspaper editor ridiculed Walt Disney because he had no good ideas in film production.

He failed the 6th grade. However, that never stopped him to work harder! He strived and eventually became the Prime Minister of the United Kingdom during the Second World War. Churchill is generally regarded as one of the most important leaders in Britain and world history. In a poll conducted by the BBC in 2002 to identify the “100 Greatest Britons”, participants voted Churchill as the most important of all.

He is an American film director. He has won 3 Academy Awards and ranks among the most successful filmmakers in history. Most of all, Steven was recognized as the financially most successful motion picture director of all time. During his childhood, Spielberg dropped out of junior high school. He was persuaded to come back and was placed in a learning-disabled class. He only lasted a month and then dropped out of school forever.

This man was a theoretical physicist widely regarded as the most important scientist of the 20th century. He was awarded the 1921 Nobel Prize for Physics for his explanation of the photoelectric effect in 1905 and “for his services to Theoretical Physics”. However, when Einstein was young, his parents thought he was mentally retarded. His grades in school were so poor that a teacher asked him to quit, saying, “Einstein, you will never amount to anything!”

In 1947, one year into her contract, Marilyn Monroe was dropped by 20th Century-Fox because her producer thought she was unattractive and could not act. That didn’t deter her at all! She kept on going and eventually she was recognized by the public as the 20th century’s most famous movie star, sex symbol and pop icon.

John Grisham’s first novel was rejected by sixteen agents and twelve publishing houses. He went on writing and writing until he became best known as a novelist and author for his works of modern legal drama. The media has coined him as one of the best novel authors even alive in the 21st century.

Henry Ford’s first two automobile companies failed. That did not stop him from incorporating Ford Motor Company and being the first to apply assembly line manufacturing to the production of affordable automobiles in the world. He not only revolutionized industrial production in the United States and Europe, but also had such influence over the 20th century economy and society. His combination of mass production, high wages and low prices to consumers has initiated a management school known as “Fordism”. He became one of the three most famous and richest men in the world during his time. To top it all, he never had a driving license.

He was turned down by Toyota Motor Corporation during a job interview as “engineer” after World War 2. He continued to be jobless until his neighbours starting buying his “home-made scooters”. Subsequently, he set out on his own to start his own company. Honda. Today, the Company has grown to become the world’s largest motorcycle manufacturer and one of the most profitable automakers – beating giant automaker such as GM and Chrysler. With a global network of 437 subsidiaries, Honda develops, manufactures and markets a wide variety of products ranging from small general-purpose engines and scooters to specialty sports cars.

The founder of giant electric household products firm, Sony Corporation, had his first product as an electric rice cooker. They only sold 100 cookers (because it burned rice rather than cooking). Today, Sony generates US$66 billion in revenue and ranked as the world’s 6th largest electronic and electrical company.

I am certain that you have had your failures in life too. I am absolutely nobody to comment on it or say some thing as cheesy as ‘So What?’. It is you who needs to say ‘So What?’ and move on; because it is only a matter of choice – To Outgrow or To Succumb.

2 thoughts on “When Elephants Fall ! Failures to learn from.”

A story in pictures

There was an error retrieving images from Instagram. An attempt will be remade in a few minutes.

Hi, I am Abhinandan.
I am an L&D specialist, TEDx Speaker, Blogger, Writer, Thinker and a Foodie.
Click on my picture to get in touch

Humanware Works by Abhinandan Chatterjee is licensed under a Creative Commons Attribution-NonCommercial-ShareAlike 3.0 Unported License.
Based on a work at www.humanwareworks.com.
Permissions beyond the scope of this license may be available at www.abhinandanchatterjee.com.

QR Code for this blog